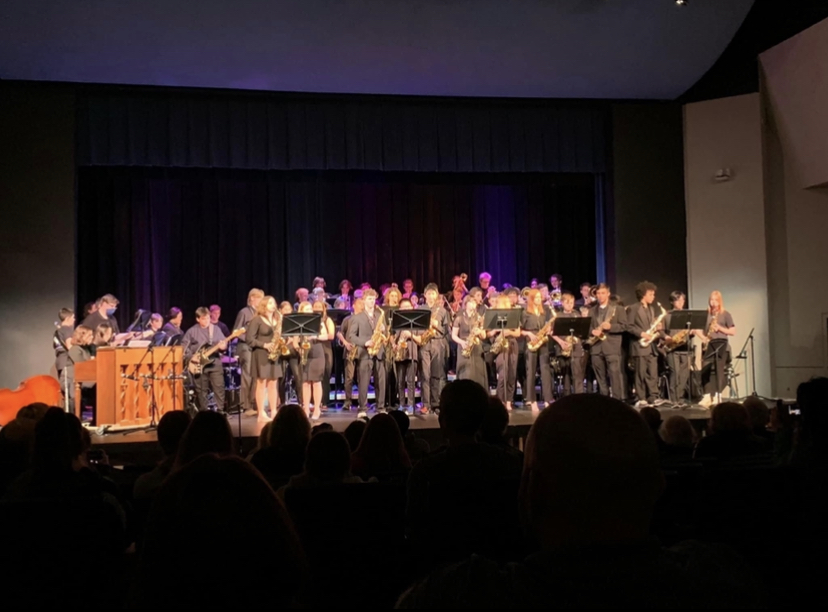 First ever Night of Jazz closed the night out performing a combined piece on stage with about 70 students.

The Night of Jazz

High school and middle school music programs joined together for what is hoped to be an annual event showcasing jazz bands at Dallastown.

Historically, the middle school and high school music programs at have not collaborated together for a concert, but that all changed on April 28.

In addition to being a night to celebrate music, band director Mr. Justin Buer said the evening also serves a greater purpose: looking towards the future.

“I have always put a lot of stock in program growth, whether I was in the Middle School Choir position or now in the HS Band position.  My goal is always moving the program forward.  One thought was to have this “Night of Jazz” so that students could see the progression of performance level as they move through the different buildings.  You could call it a dangling carrot if you’d like.  It is hopefully something to get the younger instrumentalists excited about what they can achieve if they work hard, keep practicing, and “move up the ladder” as they grow older,” Buer said.

The joint concert involved pieces the high school jazz bands have been working on since about December and have performed at competitions around Pennsylvania.

Spectators were greeted by a bake sale in which cookies and brownies were sold for $1 each with donations accepted.

Overall the student-initiated bake sale raised over $100 for the Dallastown Music Boosters.

According to Buer, the plan is to continue with the event next year and to possibly make it even bigger,

“Next year we intend to expand the program by including the IS jazz band as well.  We did not this year because the IS director was on Maternity Leave in the Spring and therefore jazz band did not meet,” Buer said.

Read on to find out more about this concert from both the onstage and the spectator perspective.

The middle school jazz band  opened the concert with “Billy Boy” and concluded their portion of the night with “Frankenstein” led by middle school band director Mrs. Ruth.

The auditorium was filled with excited parents and members of the community. The night was a success!

“I was expecting a fairly light crowd since it was new. Hopefully that first performance was a catalyst though,” high school band director Mr. Buer said.

Each group featured a few talented students with improvisation or previously written solos.

The Dallastown jazz lab performed following the middle school with “Channel Three” featuring a flugelhorn, “You Stepped Out of A Dream” featuring a tenor sax, and “Critical Mass” featuring a jazz flute solo.

To conclude the concert all three groups joined each other on stage to play “Smoke on the Water”. The stage was filled with about 70 students between the three groups.

Mrs. Ruth and Buer hope to expand the night to the intermediate school and feature more Dallastown students for next year’s show.

Everyone is very excited to see where Dallastown takes its new night of jazz. 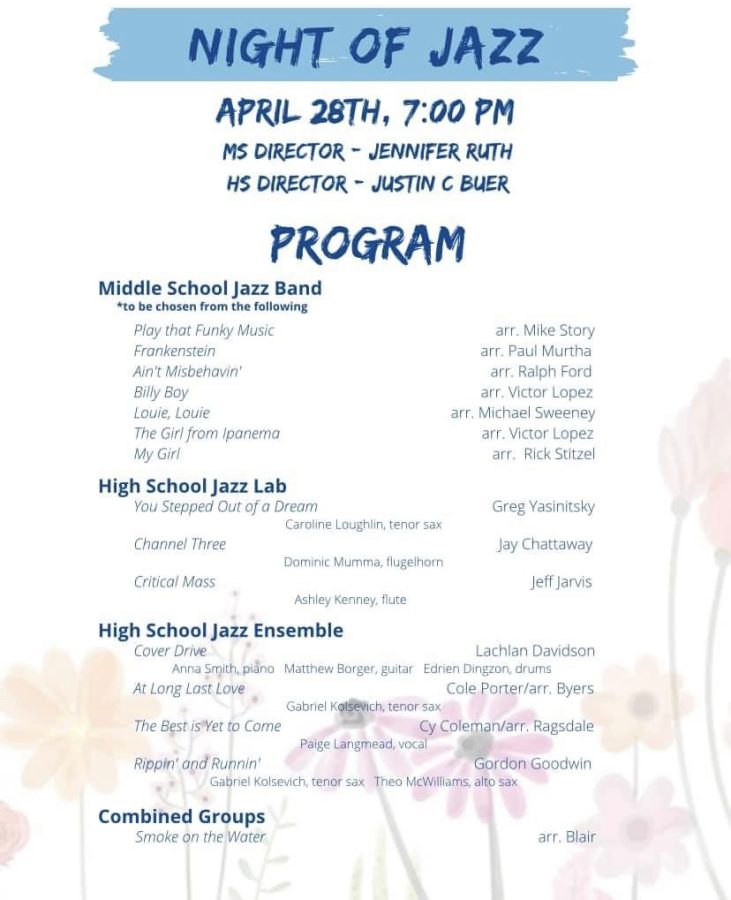 As I walked in, 5 minutes fashionably late, the music boomed all around me and my friends. The middle school band had been playing “Billy Boy” and I was just trying to catch along where they were within the song.

Being the jazz ameateur I am, I was automatically blown away. Everyone sounded professional and synchronized.

Those around me, mostly parents and grandparents, were tapping their feet and bopping around their heads, enjoying seeing their kids perform, but also enjoying themselves and their appreciation for jazz.

The way I found out about the night was by word of mouth, from friends who were performing that night, which was my main motive for going.

But shortly after being in the audience, I realized that I enjoyed it further than just supporting my friends.

Fellow audience member and friend Lilyanna Muniz felt that the night was “…the night of showcasing talent that was so heart warming  to the Dallastown community.”

..the night of showcasing talent that was so heart warming  to the Dallastown community”

Everyone in the room was enjoying themselves, especially those on stage performing or waiting to perform.

Exchanges of laughter and excitement was evident in the multiple groups performing that night, just showing how times to display their talent can be so connecting.

Maryam Ba, audience member and coincidentally my friend as well, thought that all the band’s performances were “amazing and they all looked like they belonged up on stage.”

Considering the fact that this was the first Night of Jazz, the middle school auditorium wasn’t incredibly full, but I think for years to come and more word about the night spreads, the crowd will grow.

It was almost like a gift having a smaller audience because the performances felt more tight-knit and personal, like a small group of us knew about this “underground” thing happening right in our own school!

To top it off, there was a bake sale in the lobby that could accommodate the sweet tooth of those there that night.

Overall it was a really good night and I’m excited for more to come, as well as it’s popularity to expand.

Donate to The Beacon
$0
$500
Contributed
Our Goal
Submitting donation...